This paper outlines leadership characteristics identified in the movie, Harry Potter and the Sorcerer’s Stone. In general, this movie is based on the book written by J. K. Rowling about a boy who attends a school for wizardry. Harry Potter spends his first year of school challenged with fighting for good and against evil (Bealman, n.d., as cited by Columbus, 2002). More specifically, Harry Potter, a first-year student at Hogwarts School of Witchcraft and Wizardry, is a member of one of four residential houses at Hogwarts that typically are in competition with each other in a number of sports and academic contexts. Harry makes close friends with many of the students, and his family history of wizardry makes him popular throughout the school. Still, some in the school despise him and create difficult and dangerous situations for Harry and his friends to face throughout the film. They all survive their first year relatively unscathed (Bealman, n.d., as cited by Columbus, 2002). The leadership theory used to support the analysis of this film comes from the authors Kouzes and Posner’s (2012) 30-year research on the topic using data from over 2M people across the globe. Their featured book is called, The Leadership Challenge: How to Make Extraordinary Things Happen in Organizations, 5th Edition.  Professional references are provided in-text and links to the source can be found in the Reference section at the bottom of this page. 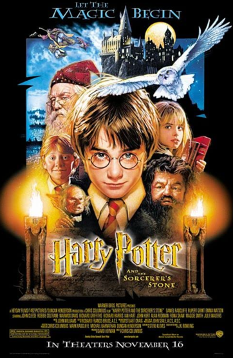 In my last post titled, Enable Others to Act, I outlined and explained multiple leadership characteristics used in the movie, Freedom Writers (2007). The leadership strategy I used as reference for my evaluation aligned with Kouzes & Posner’s (2012) book titled, The Leadership Challenge: How to make extraordinary things happen in Organizations, 5th Edition.  In general, Kouzes & Posner describes their philosophy with five practices of exemplary leadership that focus on a leader’s actions to ‘Model the Way’, ‘Inspire a Shared Vision’, ‘Challenge the Process’, ‘Enable Others to Act’, and by ‘Encouraging the Heart’.

For the movie, Freedom Writers, I focused on characteristics associated with the fourth practice of exemplary leadership – Enable Others to Act. For this post, I’m going to share what leadership characteristics were identified in the movie, Harry Potter and the Sorcerer’s Stone using the same leadership philosophy. However, in order to continue learning the philosophy, I’ll focus my analysis on the fifth practice of exemplary leadership linked to ‘Encourage the Heart’.

According to Kouzes & Posner (2012), leaders give heart by visibly recognizing people’s contributions to the common vision with a thank you note, a smile, and public praise. Leaders let others know how much they mean to the organization. To recognize contributions, leaders must share their appreciation for behaviors associated with individual excellence and celebrate the values and victories by creating a spirit of community (Kouzes & Posner, 2012). With this in mind, I’ve outlined a few examples of such behavioral characteristics from the movie that stood out most, listed below.

Scene synopsis: Professor Albus Dumbledore, the headmaster of Hogwarts, is winding down the school year and awarding the house cup to one of four residential houses based on a series of competitive events and other contributions to the school. In announcing the winner of the year’s house cup, the professor describes a number of actions that members of one house took throughout the movie. (Bealman, 2020)

What examples of Encourage the Heart did you see in this scene? This scene offered the viewer many examples of the effective leadership practices associated with encouraging the heart. For starters, Professor Dumbledore did a great job of recognizing contributions from the students at his school of wizardry. Here, he not only recognizes all the teams for their contributions and achievements along the way, he also individually recognized a few of the high achievers for other acts of exemplary leadership. For instance, Professor Dumbledore recognizes the top teams, which Slytherin was ranked #1 while Grifindor fell shortly behind. Thinking ahead, he publicly announces special achievements such as Armenia receiving 50-points for performing exemplary acts of leadership while facing danger, Ronald receiving 50-points for playing the best game of chess EVER, and Harry Potter gets noticed for his pure nerve and outstanding courage to stand up for his cause. As a result of these special achievements, Grifindor came back from being the underdogs to win the ‘House Cup’. According to Kouzes & Posner (2012), exemplary leaders elicit high performance because they strongly believe in the abilities of their constituents to achieve even the most challenging goals. This was evident in the movie as all of the Professors expected the students to perform at their very best, all the time. When the students failed to perform at their best, the staff would deduct points from the individuals accordingly.

What things did the headmaster say in his remarks that makes this an example of Encourage the Heart? Additionally, this scene offers viewers a perfect example of Professor Dumbledore providing feedback to his students and the other staff members. He clearly outlines the goals and the rules when he speaks to everyone. The scene also provides a good example of celebrating the values and victories of others. In this case, Professor Dumbledore developed a spirit of community within Hogwarts that was unlike any other. An example of this behavior can be noticed when everyone starts to clap during the event because someone else’s accomplishments are publicly broadcasted. This shows a good sense of camaraderie and love for one another based on mutual respect of a shared cause/vision. Everyone was always personally involved with each other to support their collective actions to become wizards. The students and the professors talked amongst each other and shared stories about their achievements and expressed their appreciation so graciously.

Is there anything he might have done differently? I believe that Professor Dumbledore delivered the feedback to his students exactly how he intended to, like an exemplary leader would. Perhaps…honest, sincere and unfiltered with a splash of humor that’s balanced with love. You can tell that the hand-picked students were valued for who they were as individuals and for their future potential as wizards. After all, they were the chosen ones. With some hard work and fun, the students were off to a great start.

Was there anything different about how the headmaster recognized each person? Professor Dumbledore recognized each of the students with high achievement by calling their names, providing an overview of their actions that led to the recognition-worthy event, and their awarded points. This showed that Professor Dumbledore truly admired both the good and the bad events that helped shape the students on their individual journeys at his school. Above all, this scene shows how Professor Dumbledore believes in everyone’s ability to make progress in life. He made celebration a part of his organizational life, which helped the students observe a model of behaviors that they could later use in their own individual lives. More specifically, this scene brings light to the saying that “Leadership is Everyone’s Business” (Kouzes & Posner, 2012).

After the remarks, did you notice anything happening with everyone in the banquet hall? Everyone in the banquet hall celebrated the values and victories of others. They were all excited for the occasion and decided to come together to celebrate their wins/loses together as a team. In this case, Professor Dumbledore and his staff established a social support framework for the students to further develop their relationship with one another. According to Kouzes & Posner (2012), after a 10-year study of service quality, a significant lesson learned was that social support networks are essential for sustaining the motivation to serve. Furthermore, the study also disclosed that shortfalls in service performance are highly correlated with the absence of social support and teamwork experiences.

With all things considered, don’t forget that leadership is a relationship. It’s a dialogue, not a monologue. Leaders are ordinary people just like you. To become an exemplary leader, you must look inward and recognize your own potential before you can lead others. Once you acknowledge that you are just as important in this world as everyone else, regardless of your title, position, status, etc., you must take action and do what’s right. Due to the constant state of volatility in our world, leaders like you are desperately wanted and needed. If you are seeking direction or guidance on your journey to become the best leader you can be, don’t forget to practice ‘The Leadership Challenge” of behaviors linked to exemplary leadership that are focused on Modeling the Way, Inspiring a Shared Vision, Challenging the Process, Enabling Others to Act, and Encouraging the Heart.

Thanks to Kouzes & Posner (2012) for the shared wisdom on leadership. Most importantly, thanks to you for all the great acts of leadership you will perform in your life to come.