Close
The Leadership Challenge - Enable Others to Act
Abstract

This article outlines leadership characteristics identified in the movie, Freedom Writers. Freedom Writers is based on the diaries written by students at Woodrow Wilson High School in Los Angeles. Teacher Erin Gruwell is in her first teaching job and works with at-risk students challenged by a community of violence, drugs, gangs, and little hope or promise to achieve anything beyond the life they know (Bealman, n.d., as cited by LaGravense, 2007). The leadership theory used to support the analysis of this film comes from the authors Kouzes & Posner’s (2012) 30-year research on the topic using data from over 2M people across the globe. Their featured book is called, The Leadership Challenge: How to Make Extraordinary Things Happen in Organizations, 5th Edition.  Professional references are provided in-text and links to the source can be found in the Reference section at the bottom of this page. 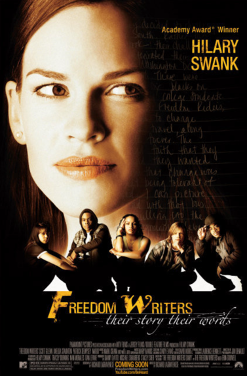 In my last post titled, The Leadership Challenge – Inspire a Shared Vision & Challenge the Process, I outlined and explained multiple leadership characteristics used in the movie, Invictus (2009). The leadership strategy I used as reference for my evaluation aligned with Posner & Kouzes (2012) book titled, The Leadership Challenge: How to make extraordinary things happen in Organizations, 5th Edition.  In general, Kouzes & Posner describes their philosophy with five practices of exemplary leadership that focus on a leader’s actions to ‘Model the Way’, ‘Inspire a Shared Vision’, ‘Challenge the Process’, ‘Enable others to Act’, and by ‘Encouraging the Heart’.

For the movie, Invictus, I focused on characteristics associated with the second and third practice of exemplary leadership – Inspire a Shared Vision and Challenge the Process. For this post, I’m going to share what leadership characteristics were identified in the movie, Freedom Writers  using the same leadership philosophy. However, in order to continue learning the philosophy, I’ll focus my analysis on the fourth practice of exemplary leadership linked to ‘Enable Others to Act’.

According to Kouzes & Posner (2012), leaders know that they can’t do it alone. They need partners to make extraordinary things happen in organizations. Leaders invest in creating trustworthy relationships. They build spirited and cohesive teams, teams that feel like family. They actively involve others in planning and give them the discretion to make their own decisions. Leaders make others feel like owners, not hired hands. (Kouzes & Posner, 2012)

Leaders develop collaborative goals and cooperative relationships with colleagues. They are considerate of the needs and interests of others. They know that these relationships are the keys that unlock support. Leaders bring people together, creating an atmosphere where people understand that they have a shared fate and that they should treat others as they would like to be treated. Leaders make sure that everyone wins. (Kouzes & Posner, 2012)

To do this, leaders must be able to ‘Foster Collaboration’ by building trust and facilitating relationships and ‘Strengthen Others’ by increasing self-determination and developing competence (Kouzes & Posner, 2012). With this in mind, I’ve outlined a few examples of such behavioral characteristics from the movie that stood out most, listed below.

Scene synopsis: This scene depicts an example of how relationships evolve, and trust is built as people get closer to each other, in this case by finding experiences they can share. The students’ inspiration comes from each other: after reading The Diary of Anne Frank, they believe that they can bring Meip Gies (the woman who helped hide Anne Frank from the Nazis in World War II) to speak at their school. They find within each other that they have the capacity to make this seemingly impossible visit happen. As they gain confidence in themselves, they develop a stronger belief that anything is possible if they are creative and persistent. (Bealman, 2020)

Describe the examples of ‘Enable Others to Act’ you saw in “Heroes.” In this scene, there are many examples of the essential behaviors associated with enabling others to act. For starters, the teacher (Mrs. G) does a great job of showing concerns for others as she builds her classroom into a ‘climate of trust’. This allows her students to not only trust in her actions to model the way, but also build trust amongst themselves as a result of her initiatives to ‘facilitate relationships’. According to Kouzes & Posner (2012), facilitating relationships is how leaders develop a culture of trust within a team, which requires them to develop cooperative goals & roles, support norms of reciprocity, structure projects to promote joint efforts, and encourage face-to-face interactions.

This is a great lead into the next example of exemplary leadership, when Mrs. G took the initiative to purchase the book, The Diary of a Young Girl by Anne Frank. In this scenario, Mrs. G wanted to share literature with her students that was more relevant to their challenging lives at home, opposed to having them read the school-assigned books they couldn’t relate to. This action by Mrs. G enabled others to act in ways that showed her students’ progress. For instance, one student liked Ms. Miep Gies—the lady who helped Anne Frank—so much he took the initiative to get more books about her from the library. This shows how Mrs. G’s leadership actions strengthened her students by making them feel, and be, more powerful and capable of making things happen on their own (Kouzes & Posner, 2012).

Another example of enabling others is when Mrs. G decided to allow her students to write letters to Ms. Gies’ expressing their thoughts and feelings about the book, The Diary of a Young Girl. In this situation, Mrs. G developed a cult of empowerment with her students by enhancing their self-determination. She did this by giving her students a chance to contribute, each of their own individual ideas to support a shared vision of getting Ms. Gies to visit their school and meet them face-to-face. In addition, Ms. G also accomplished this by sharing resources with her students and organizing work (i.e. the fundraiser) to build their competence and ownership, and foster self-confidence (Kouzes & Posner, 2012). All of which, led to the most impactful moment of the scene, when Ms. Gies actually visited the students at school—due to their combined effort to raise enough money at the community fundraiser—in order to share the true story behind her heroic efforts to save Anne Frank.

In the latter part of the scene, when Ms. Gies is speaking, how do her words show Enable Others to Act? In the final tear-jerking moments of this scene, Ms. Gies displays qualities of exemplary leadership when she tells the students about the rough times during the war. She tells a relatable story in the sincerest manner. She told the students they were also important and could make a difference in life. She trusted them. As a result of the students trust and connection, one student stand’s up and tells Ms. Gies that she is his hero. In return, Ms. Gies tells the students they are the true “heroes” because of the actions they have been making in their daily lives to improve their own situations. “As ordinary people, we can also, in our own small ways, turn a light on in a dark room” (LaGravense, 2007, as cited by Miep Gies).

Scene synopsis: This scene begins with two characters struggling to resolve difficult personal situations: Marcus, who has been estranged from his mother for years, and Eva who, in the finale to one of the film’s sub-stories, must testify in a murder trial involving a man from a street gang that her father (who is currently in jail) belongs to. Eva is being pressured because of her father’s gang affiliation to testify that someone other than the accused actually committed the murder. Her honest testimony puts her and her family in danger of retaliation.

What ‘Enable Others to Act’ behaviors did you observe in “Courage”? This scene is all about showing the fruits of Mrs. G’s exemplary leadership labor to enable her students to act. It emphasized how such efforts led to the strengthening of others, which was displayed when both students exhibited commitments to the enhancements of their own self-determination, their development of competence and confidence to do what was right regarding their own respective situations. All in all, both students fostered enough energy to confront their problems the best way they could, by engaging in face-to-face interaction with their fears, “because it was the right thing to do”; similar to Ms. Gies’ story with Anne Frank (LaGravense, 2007). This behavior from both students also proved that through Mrs. G’s efforts, they were able to understand the value of ‘personal accountability’ and find ways to apply such values to their own personal lives.

In either scene, what other practices or leadership behaviors did you notice? Alternative examples of leadership behaviors included (but was not limited to): the times when students started to feel comfortable enough to collaborate with each other, share experiences and resources, and also look past common discriminatory gestures such as name calling and profiling. In addition, one of my favorite acts of leadership was when Mrs. G decided to take the initiative to help the students see how much they all relate to one another by asking questions, which were designed to get the students to approach the line in the middle of the classroom if the question applied their past experiences. This was a wonderful leadership technique that helped the students realize–regardless of their skin color, background, or where they we raised—they weren’t much different than each other and instead of doing things on their own, they could accomplish more together. Similarly, I enjoyed watching students like, Marcus, build his weak character into a strong-souled young man with a little assistance from Mrs. G’s leadership efforts. Especially, the part when Marcus asks Mrs. G if he could do the pleasure of escorting Ms. Gies into the classroom during her visit. This showed how a once homeless, lost-soul boy, started to turn his life around and become a well-respected young man after recognizing his own potential with the support from a good leader. It’s amazing how competent he was!

With all things considered, effective leadership is a powerful tool for anyone. No matter your origin, or what your story is, you too can be exemplary leaders like Ms. Gies, Mrs. G, and the students in the movie, Freedom Writers. Leadership it not associated with a title, it’s a reflection of someone’s actions. Most important, however, is to first look inward to discover who you really are. Once you acknowledge who you are—in the most honest way—model the way, inspire a shared vision, challenge the process, and enable others to act. Until next time, keep seeking improvements and never settle for status quo. “Becoming a leader is synonymous with becoming yourself. It is precisely that simple and it is also that difficult” (Daskal, n.d., as cited by Warren Bennis).